For many men, decisions previously made can be undone. If you’ve had a vasectomy, you may wish to reverse it. The goal of this procedure is to reverse what occurred during the vasectomy, a surgery in which semen is unable to be ejaculated from the penis. That procedure does not change a man’s ability to produce sperm. As a result, for some men, it is still possible to conceive children by reversing the previous procedure. That is what vasectomy reversal is.

Why Do You Need It?

In a vasectomy, the pathway by which sperm travels is cut. This is called the vas. When it is cut, sperm cannot get into the semen that is produced. As a result, sperm cannot travel out of the penis during ejaculation. However, vasectomy reversal may help to reconnect the two ends of the vas to allow for sperm to flow successfully through the pathway again.

If you are a man that has had a vasectomy and you wish to conceive children, potentially, in the natural way, you will need to consider a reversal. Once the tubes are rejoined, the process is considered normal. However, there are some limitations to this procedure and it does not work in all cases. For many men who wish to start having a family again, such as in a new marriage or later in life, it may be possible to do so. 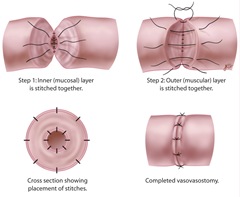 There is no doubt this is a big decision to make. The procedure itself is considered safe for most men. And, while it is not a very invasive procedure, it is a delicate one that may not be effective. If you are considering having a vasectomy and there is any chance in the future that you may want to have children, it is best to avoid vasectomy in the first place. However, if you have already had it done, it may be possible to reverse it.

Vasectomy reversal isn’t the type of procedure you should take lightly. It is best to sit down and talk to your doctor about it, why you want it, and what your chances of success are, as these can differ from one person to the next. When you call our offices to schedule a consultation with the best urologist in New York City, you’ll gain the information and insight you need to make the best decisions for your future needs.