When a vasectomy is performed to prevent fertility, the duct that carries sperm from the epididymis to the testicle is cut, and over time, scar tissue can develop. This has generally been considered a permanent procedure, but for many reasons, men sometimes decide they want a reversal of the vasectomy, or a vasovasotomy, which is a microsurgical procedure that was first successfully performed in 1971. During this procedure, the cut ends of the vas deferens are reattached, and this will sometimes restore fertility. An experienced urologist, like Dr. Larish, a top New York vasectomy reversal specialist, is a surgeon who specializes in surgeries of the male genitourinary tract. Dr. Larish can assist you to determine if this procedure can reverse your vasectomy. 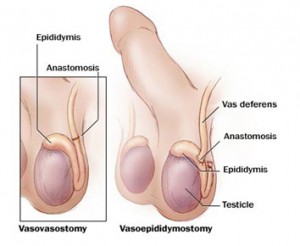 Sometimes, a vasovasotomy may not be successful to restore fertility, particularly if autoantibodies have formed that disrupt the normal activity of sperm, or in cases where blockages have formed in the vas deferens. If there is a blockage at the epididymis, then you may require a vasoepididymostomy to restore your fertility. Antisperm antibodies can develop during the period of time after a vasectomy, and they reduce the motility of sperm, thus resulting in diminished fertility. For this reason, Dr. Larish, New York’s Top Vasectomy Reversal Doctor, often recommends a vasoepididymostomy for patients who may have experienced these problems.

Presence of Sperm in the Vas Deferens

During a vasovasotomy, a urologist should always examine the vas deferens to determine if there is sperm present. This can be done under a microscope during surgery. If sperm is present in either end of the vas deferens, the vasectomy can be successfully reversed with a return to fertility, as long as the surgeon makes a watertight seal when completing the reconnection. However, some surgeons do not check for sperm during the procedure, and this is a significant cause of failure of vasectomy reversals. This typically occurs when surgeons do not perform many vasectomy reversals, but an experienced urologist will always check for the presence of sperm during a vasectomy reversal. As the length of time since a vasectomy increases, fertility restoration more frequently requires vasoepididymostomy to bypass areas of “blowout” or obstruction in the epididymis, which may occur as a result of trauma or infection. During a vasoepididymostomy, the surgeon attaches the vas deferens to part of the epididymis.

If you have had a vasectomy and now want to restore your fertility, you should call Dr. Larish, New York’s best vasectomy reversal surgeon, for your consultation.  Dr. Larish can best advise you how to proceed. Call our office today at 646-862-5500 for your appointment.